Happy Halloween, everyone! Here's a roundup of what's new in Rollbar this month.

More in the docs. It's available now on Rubygems (latest version is 1.2.7).

We've upgraded status.rollbar.com. We'll be using it to communicate about outages, so if you'd like to be notified, go there and subscribe to updates. The new status site also shows the current maximum latencies for the processing pipeline.

You can now link a Rollbar item with an existing issue in your issue tracker:

Or if you have a Rollbar item that is already linked, you can now change or remove the link. This works with Asana, GitHub Issues, JIRA, Pivotal Tracker, Sprintly, and Trello. 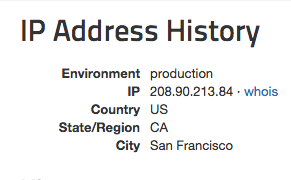 You can get there by clicking on an IP address anywhere in the app. More features on this theme to come; stay tuned.

Basic stats on the Item page

The basic item statistics--when it was first and last seen, how many times it has occurred since being resolved, and how many total IPs have been affected--are finally available at a glance on the Item detail page.

If you'd rather see timestamps use a 24-hour clock, head over to your project's Settings page: